All the world’s a stage, And all the men and women merely players. They have their exits and their entrances, And one man in his time plays many parts…

It is amazing to think 400 years later Shakespeare’s legacy lives on.   We continue to read and perform his plays, and we enjoy the subtle messages in his quotes.   To think we can walk in the footsteps of this legacy is impressive.

Shakespeare Globe Theater  is a magical experience with its roof open to the skies. Unlike modern theaters, the entrance through the wooden doors takes you to stage right where you already feel a part of the show.  And that is the intention.  All of the performances  are interactive, fun, and funny.

We know what we are, but know not what we may be.

The first rows of seating surround the perimeter at the stage level.  Like the original theater, seats are made of hard, wooden slats.  Without the ambiance, the show could  not replicate the era of Shakespeare.

All that glitters is not gold. 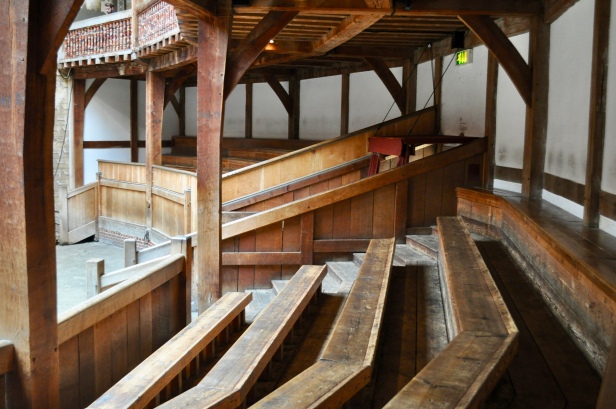 The stage is brilliant and the intricacies of design are  a masterpiece. Even its position to the sun was well thought out in an effort get the most light of the day. For this view,  the best tickets, (5 pounds) are the ones purchased to watch show from the foreground.  The audience here are appropriately named Groundlings.  The catch in being stage front is there are no chairs.  You stand for the entire 3 hours regardless of the weather or the amount of people. You must also embrace the notion that you will become a part of the show. While it seems an unconventional way to watch a theater production, these are the most sought after tickets.  Dubious souls are best seated in the upper tiers where they can watch the fun. 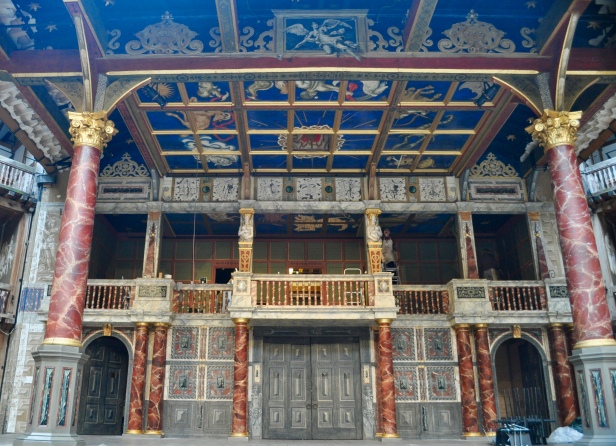 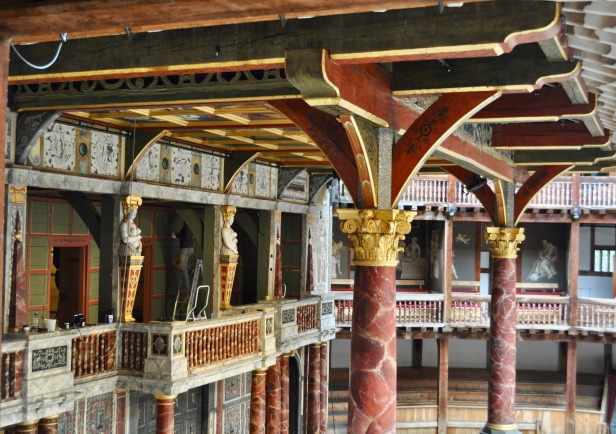 The Shakespeare Globe Theater is both entertaining and a blast to 1600 century entertainment, courtesy of Shakespeare himself.   His spirit and legacy remain alive all over London, and just down the street,  another reminder of  his wisdom.

Thanks for stopping by,